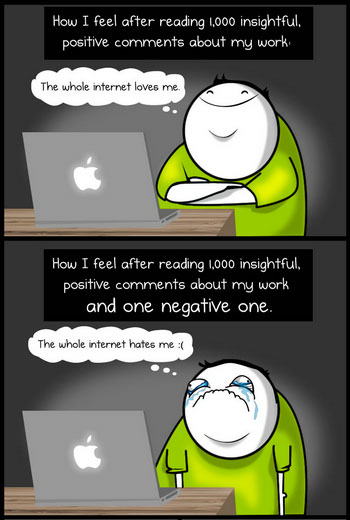 Today’s artwork is not mine. It’s an excerpt from a cartoon by Matt Inman, aka The Oatmeal, whose work always makes me laugh. Mostly because it’s so true. Here’s the comic in its entirety: Some thoughts and musings about making things for the web. I dare you to read it and not laugh. (Oh. I should probably say: contains abundant cussing and poop jokes. Like, a lot.) Go ahead. Read it. I’ll wait…

See? Funny, right? Because at least one thing in there hit close to home. That’s why I love his comics so. Something in each one makes me nod my head in recognition as I’m laughing myself silly. I highly recommend following him on Facebook or Twitter.

So. Why am I posting a comic, instead of my own work?

Because I’m no longer sure I want to share my work, for the very reason this comic illustrates. Somebody said something ugly about the last piece of artwork I posted on this blog—which you can read, along with my response, over here. Scroll down to the bottom of the page there. Again, I’ll wait…

What this woman wrote hurt my feelings, for a lot of reasons.

First, she was implying that I was somehow racially insensitive. That’s so far from the truth, I’m not even going to discuss it. But in case it did bear discussion, an artist friend on Facebook posted it for other artists of color to discuss, telling them only that I was white. They had a lot to say—and pretty much none of it was about race. Nobody really cared that I was white, and the image I used was not.

Next, the topic of the artwork was pretty sensitive. I opened myself up a little, and talked about health concerns. For someone to reduce that particular piece to “you’re white, and she’s not” misses the whole point, and trivializes the things I wrote about. Hey, thanks for letting me know that if I bleed to death today, you’ll be offended by my choice of imagery. Excellent prioritization.

And mostly, although I do my best to hide it, and insulate myself from it, I am, in fact, a very sensitive person who is easily hurt. That’s why you can’t make comments on this blog. Too many people wrote things that hurt my feelings, and I just couldn’t spend a chunk of time crying over anonymous blog comments every week. That’s why I make it hard for people to contact me, unless we’re doing business. Too many people wrote nasty emails about whatever opinions I expressed here, and I really didn’t need that negative energy blocking me from writing openly about my life, and my work.

So. Even though I got a ton of sympathetic comments about what that piece, and the writing that went with it, were about, one insensitive person, calling me abominable, was all that I heard.

I’ll be over here, thinking hard about whether to share any more work…