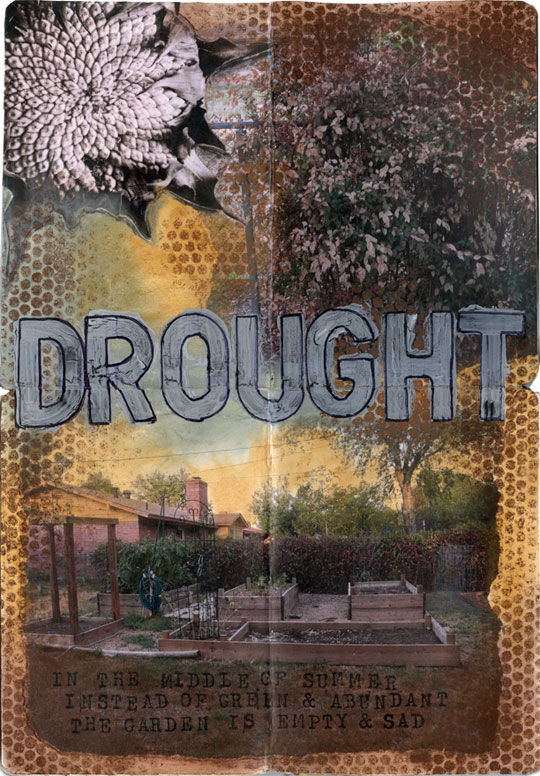 Here’s a cheery image for you on Black Friday—part of my journal for The Sketchbook Project. I decided I couldn’t really do a book about my garden, and not reference what happened this summer. In a sea of bright, cheery pages, this set stands out in its bleakness. And yes, just to make it even more obnoxious, it folds out, to make it twice as tall as the other pages. Go big, or go home, right?

Today begins that season which keeps me at home, far away from other people. I loathe the holiday shopping frenzy. Three years of working holidays in a craft store will cure you of any idea that the human race is good and kind. It brings out the worst in a lot of people. I refuse to participate in the whole Black Friday routine. There’s nothing anybody needs badly enough to get trampled, or, according to this morning’s news, pepper sprayed. I contributed to the economy by buying a new television last week, to replace one that I was given in 1990, and another that I bought when I moved into this house in 2000, and has been stuck on DVD for three years. That’s it. I’m out.

Tonight is art journaling night with my local group. Even though it’s a holiday weekend, we still have a small group of diehards attending, myself included. I have to run outside and take a few photos, and prep some pages with them this afternoon. I’m hoping that after tonight, all the pages in my Sketchbook Project book will have work on them. Between now and Christmas, I’ll do lettering and finishing. This morning, I did a round of Dorland’s wax on all the pages I’ve finished in the past few weeks. The number of pages with waxed paper between them to keep unsealed acrylics from sticking together is dwindling to a very few.

I’m also gearing up to start prepping another online class. My first one went really well, and I got some good input from the blind class evaluation forms. I think the next one is going to be a da Vinci themed book, with lots of interactive things going on inside. In a workroom filled with books waiting to be altered, the hold up is—having two books that are a normal size that everyone can find. I have tons of odd books tucked away for altering—tall, skinny, tiny, fat, huge, whatever—but none that are, say, the size of your basic hardcover novel. I was tempted to go to Half Price Books today, and use the 40% off coupon they emailed me, but I think I’ll stay home, and buy a couple of $3. clearance books on Monday instead…