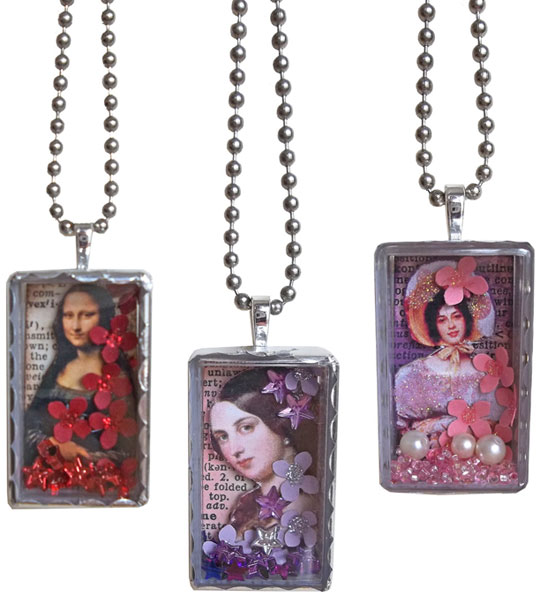 This week’s art is sort of a work thing rather than the more personal art I usually post here, but I liked these so much that I wanted to share. These are shadowbox pendants I made for the penultimate issue of The Monthly Muse. I’ve been making three or four projects for this ‘zine every month since 2005, and I’ve rarely shown any of that work here. Next month, I’ll produce the final issue, which is both sad and a great relief. The Monthly Muse was the very first thing offered for sale by Ten Two Studios, and the first round of subscriptions paid to maintain my life while I produced my first book. Still, after 90 issues, I’m ready for it to stop, so I can move on to other things.

December is a bit of quiet time for me, as I take a breath from churning out Christmas products, and just what’s posted sell, to focus on shipping any physical orders out as quickly as possible—because ’tis the season for people to need things right f-ing now. I always try to organize paperwork, plan the following year’s kit releases, and brace myself for the double-whammy of taxes that comes after the first of the year: fourth quarter estimated taxes, followed by the annual tax return epic. The paperwork of being my own business is a little scary.

At the end of every year, I also try to contemplate where I am as an artist. 2012 was one of those seismic shift years for me. Everything changed, as I made the leap from using vintage imagery, and other people’s images, to creating my own. I’m not really sure where this is heading, or how it will effect my business. I worry that what I’m selling and what I’m creating in my own time might be heading in opposite directions. I wonder if what I want to do with my work will even translate into being something that will fit into the business I’ve created.

So, maybe it’s a good thing that The Monthly Muse is coming to an end right now, because the projects I’ve been doing for it sort of represent what Ten Two Studios was when I started it, while the classes I’ve taught online this year are more representative of what I do when I’m not thinking about business things. More classes in 2013, to fill the space where The Monthly Muse used to be? Maybe. I’m still not sure.