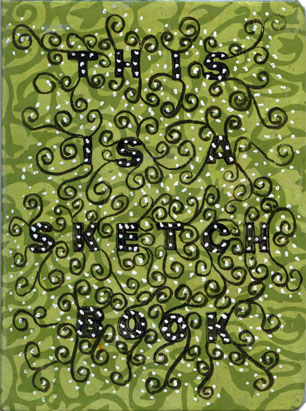 There are just two weeks left in 2011. Where did the time go?

I’ve spent today adding lettering to pages in my book for The Sketchbook Project. It’s getting done, little by little. I’ll be glad to see it boxed up and gone. I’m hoping I can do that on January 1st, to sort of start the year by finishing something. That has to be some sort of good omen, right?

So, the cover. I left it to almost last, because I wasn’t sure if I’d need some sort of closure. I decided against, played with a few things, and then settled on some plain black stenciled lettering. And it was boring. So I picked up my favorite ultra-fine pen, and started adding swirls. And it was better. Then I added some white dots. OK, good. Then, I swiped some sealer over the whole thing—and all the swirls disappeared, because my favorite pen was not permanent on and already sealed cover. Dammit! I grabbed a brush marker, redid all the swirls, and the heavier, darker lines made the lettering almost disappear. Cool. Done is beautiful.

I also left the first set of pages in the book blank, knowing I wanted to go back and add something that introduced the book—and also knowing that I should never, ever do that kind of page before the book is finished, because as much as I think I know what a book is going to be about, things change over the course of so many months. The idea I had for these pages stayed pretty much the same as my original one. I used a photo of my house taken on the day I bought it, and a couple from this spring, before the heat wave hit. I can’t help but feel just a little proud of the transformation I’ve made in the front of the house. It looks so very different than it did eleven years ago. 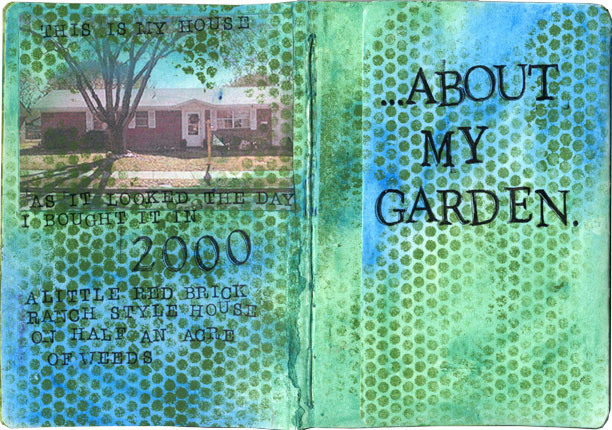 Speaking of which, I spent all day yesterday in the garden, cleaning and mowing and edging. And weeding. Oh, the weeding. Some scourge has sprouted all over the place, and is in every flower bed, gravel path, and between all the pavers on the paths. It sucks. It’s been raining a lot here over the past week or so, which is always a good thing, but especially good right now, because we are so low on rain for the year. However, it’s not good for the weedy scourge, which was growing so large in some areas that I could see the wind rippling through it. So I mowed a bunch of it down yesterday. In December. And I was not the only nut job in the neighborhood mowing.

The weather here. It’s messed up… 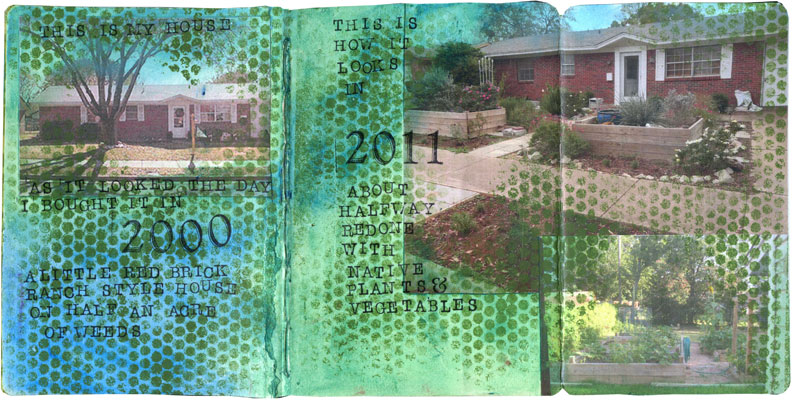