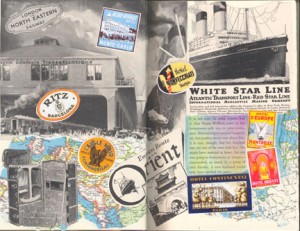 Cruise images from 1920’s magazines, reduced prints of luggage stickers, old maps, an image from a steamer trunk ad—and text from the original book that begins: “It is not true, as some reports had it, that Neysa McMein went on her honeymoon with ten, or even seven, men. Discounting the occasional hangers-on, the number never rose above five.”