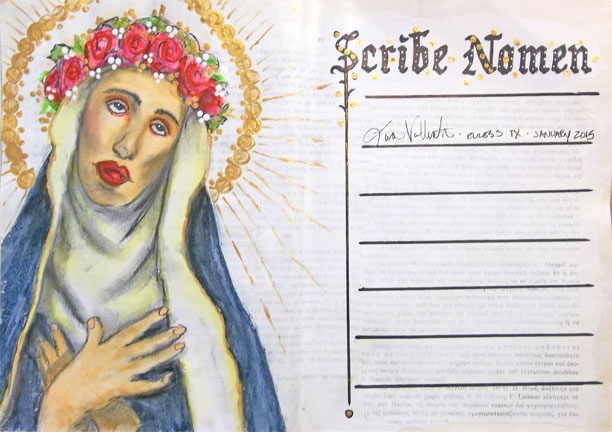 Today’s artwork: the sign-in pages in my latest altered book, which is due to go postal on Friday. Not even close to being ready to mail, with five days to go. What, me worry? I have ideas for two sets of pages. Maybe three. I’m sure I can whip them into shape before Friday.

I’m starting to chuck all my work in this book into one place, over here. I also posted a video of how this set of pages went together, over on my Patreon page.

So, this week, a friend of a friend had her photographs featured on Huffington Post, which I’m sure was a bit of a boost for her. It’s nice when big sites acknowledge your work by reaching out to you, and asking questions about it, and requesting permission to post a few photos and a short interview, rather than what usually happens: some bonehead posts your work, without credit, link, or permission, on Tumblr, and two months later, you’re filing DMCA complaints against t-shirts with your work on them, being sold on Zazzle.

Anyway, I clicked out to have a look when my friend posted the link. Lovely nude self-portrait photos, taken in front of architectural ruins and graffiti. Interesting project idea. Cool. Good for her.

And then, I read the comments on the article.

First, I am amazed by the number of people who suddenly become art critics when they view articles like this. And by art critics, I mean every idiot who owns a camera and leaves snarky opinions about the posted work, which nobody, including the artist in question, really asked for. Even in well-trained hands, in a classroom situation, a good critique can result in hurt feelings that don’t go away with time. This artist would have to have the shell of an armadillo to deflect some of the ugly comments left by fellow “photographers”.

I’m going to chalk these peoples’ comments up to sour grapes. Her work got featured at HuffPost, and yours didn’t, so you’re going to shred her. I have no respect for people like this, and they’re everywhere online.

Then, there are the people who aren’t critiquing the work, but still have to say something nasty. My favorite example of this is from one of my own YouTube videos, which are now all posted with the comments function disabled. I think the video was on how to use a glue stick. Some guy commented that I had fat hands.

WTF? Why would anyone feel the need to post that? People who wander the Internet, leaving nasty comments are the lowest. They’re also the reason you can’t leave any comments on many of my sites and profiles. I don’t have the time or energy to ponder what the hell is wrong with people dozens of times a day.

Here’s my thing: I look at a lot of art online. A LOT of art. I follow dozens of Facebook pages that rake together links to artists every day. I also belong to some very large art groups on Facebook, where art goes flying by so fast, it’s hard to keep up with it. Those of you who are subscribed to my email list know I share art links at the bottom of every one, and that’s how I find them.

So, on a good day, I might look at the work of a hundred or so different artists. I would never consider leaving a negative comment on any of their work, even if I really, really hated it, or thought it was bad. That’s not my function in life, to go around spreading negative responses to other peoples’ work. In my universe, all that’s good for is negative energy flowing back at me, and who the heck needs more of that?

I do leave nice comments if I really like something, though. Not War and Peace. Usually one or two words. Lovely. Nice colors. Thanks for sharing. Stuff like that. Because I sort of like it when people do that to me. It’s nice to have someone acknowledge they’ve seen what I’ve posted, and liked it enough to take five seconds to say so.

When you’re looking at work online, wherever it’s posted, be nice. Be positive. Be supportive, if you like what you see, or even if you don’t like it, but it’s from someone who expresses their hesitation at sharing. They don’t really need your critique. They just need to know that you see them.

Be nice, or be gone. Or, like my mom used to say, if you don’t have anything nice to say, shut up.