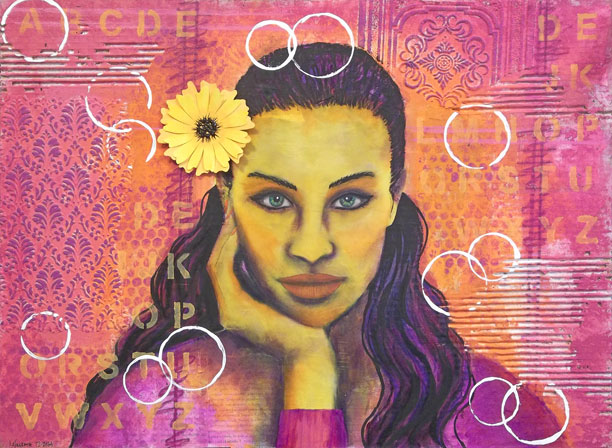 Today’s art is a piece I did just for the experience. It was subsidized by my Patreon patrons, who made it possible for me to take a few days away from making things that pay the bills, and simply make art for my personal growth. I can’t tell you what that time means to me, except to say that every year for the past 10, my resolution for the new year has been to make time for more personal art. The folks supporting me on Patreon are helping make that a reality.

I am in the midst of my bout with the Christmas plague. It was a joke in my family when I was growing up that it wasn’t really Christmas until I came down with a case of coughing/sneezing/wheezing/honking. Over the past few years, I’ve managed to dodge the bullet, but this year, I have it full on. I’m sort of pitiful and leaky, and am spending a few days laying on the couch with the dogs tucked around me.

Dogs. There are two now. Last week, I adopted a truly pathetic little chihuahua dachshund mix from the local animal shelter. She’s at least 3 years old, although I think she may actually be 6 or 7, and has clearly had at least one litter of pups. She’s as timid and shy as Jack is bold. They’re a horrible match, and so far, have very little use for each other. The shelter named her Princess, and I added Maizie, so she’s Princess Maizie for now, although she’s starting to respond to just Maizie. As soon as my plague is under control, I’ll tote her to the vet, and let him decide her age, and what to do about her rank breath and sad looking teeth. Princess Maizie is kind of a mess, but she has a home where she will be loved, even with all her faults. This morning, she wagged her tail at me for the first time, and I thought my heart would just leap out of my chest with joy. Granted, I was holding her breakfast bowl in my hand at the time. I’ll take what I can get from this timid little girl.

Before the plague and the new dog hit, I was working on a new altered board book class, which I’m hoping to have ready in January. I love board books, and I really didn’t have time to talk about them in A Year of Altered Books, so this small, quick class will cover all the basics. I might try filming some work today, to show a book going together in fast motion, but until my voice sounds a little less like the love-child of Mickey Mouse and Lauren Bacall, I can’t really record much dialog.

This is probably my last post of 2014. This year, I haven’t kept to my weekly writing schedule. I’ve lacked focus, which I think I’m getting back, thanks to my plan for 2015. I may not be able to commit to resuming The Weekly Thing in 2015, but I do think I’ll be writing more regularly, because I’ve made time for both personal art, and a new altered book round robin with some of my A Year of Altered Books grads.