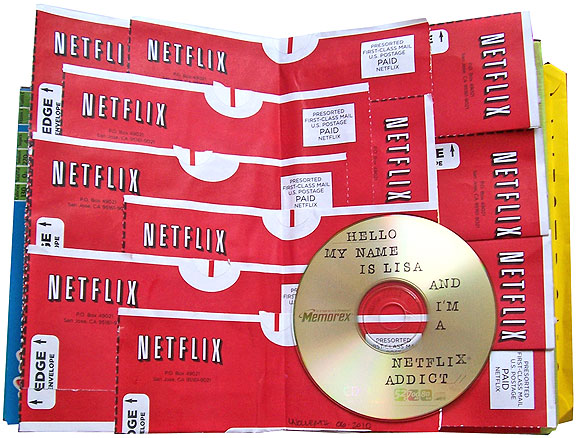 Today’s artwork isn’t new. It’s a set of altered book pages from a 2010 round robin I did with the Ten Two Studios design team. It seemed appropriate for today’s post.

One of the perks of working at home is that I can feed my movie addiction. I’ve always been a little bit of a film junkie, but making the move from corporate America to self-employed really cut into my going to the movies dollars. Fortunately, I had a Netflix subscription when I made the jump, and although I had to scale back the number of DVDs I could have at one time, I managed to scrape together enough to keep it going every month. Most days that I work on the computer, I have my work on one half of the screen, and a movie or TV show running on the other half. Right now, I’m watching the first season of Touch while I write.

Anyway, Netflix has always served me well. DVDs arrived quickly, and it was easy to get new releases the week they became available. When they added steaming services, it made keeping up with the cable shows even easier. (Since I don’t have cable, I always watch them a year later on DVD.)

And then, after years of being ridiculously reliable and easy to use, Netflix lost its mind.

I’m sure you heard about some of this, because it was all over the news, and the financial pages last year. First, they split their DVD and streaming subscriptions into separate services. At one point, they announced they were going to move DVDs onto a separate site called Qwickster, but there was such an uproar from subscribers that they dumped that idea. Ever since, though, their service has seemed to decline. In the last few months, when I returned DVDs, new ones didn’t magically arrive, because everything in my very long queue was unavailable. On the rare occasions that this happened in the past, a day later, I’d get whatever I wanted sent from another distribution center, with an apology for the delay in my inbox. Lately, there’s just been nothing sent, and no explanation.

The final straw was when I called their customer service number a few weeks back, to request that I be sent any one of the DVDs on my list, because I had returned four, and not received anything for over a week. Sadly, the customer service rep who answered my call was snotty rather than apologetic, and told me that I should try putting something in my queue that was available. I explained to her that, since I’ve rated over 5,000 films that I’ve seen on Netflix, it was really hard for me to find things I haven’t seen that are available—and that pretty much everything I’ve put into my queue in the past few months has had a long wait indicator on it. She seemed to think this was my problem.

Bottom line: her tough luck attitude made me angry, so I told her to close my account.

Well, OK, not my whole account. I’m keeping the streaming stuff for now, because it is a good way to keep up on television shows I won’t see otherwise, and it’s only eight bucks. I just can’t stand paying an extra twenty a month for DVDs that never arrive.

I signed up for a free trial at Blockbuster, and so far, I like it. They seem to be the right folks for new releases, which the Netflix CSR insisted was not what her company was about. I like getting DVDs in the mail, and being able to swap them for freebies at the local Blockbuster store. We’ll see if their service holds up once I’m off the free trial.

There you go. Nothing about art. Everything about trying to keep my movie addiction fed. Aren’t you glad you stopped by?