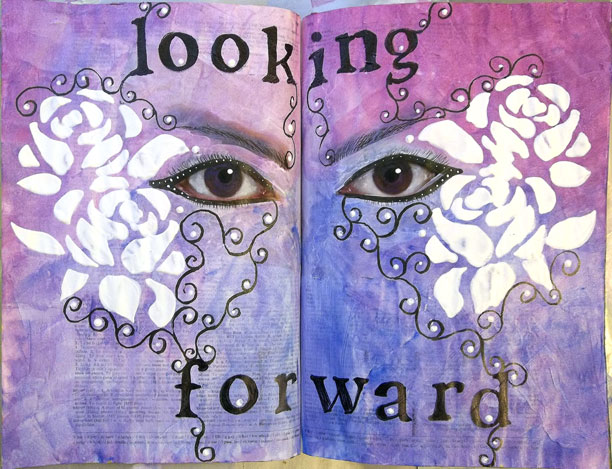 Today’s artwork is a set of sample pages from my A Year of Altered Books class, which is going very well so far. Students are talking and posting work, which is always a good sign. And it makes me happy, when I see things happening as a result of lessons I’ve put together.

So, it’s a new year. Every January, my financial slate gets wiped clean, because I get a tiny lump sum payment from an IRA I inherited from my father. Not a big amount, but with my low income, it’s enough to make a difference. I usually stuff it into my savings account, and use it to cover whatever house things need doing, and to pay quarterly taxes. Boring stuff. But before it goes to savings, I wipe my credit card clear. Any debt that has managed to build up from the previous year goes away—and last year, I charged a ton of doctors and office visits and tests, and the bill was quite large. I managed to chip it down a bit towards the end of the year, and last week, I took it to zero.

And then, the hard drive on my computer finally started singing its final song.

I’m pretty hard on my computers. I do a lot of work on very large files. In the past year or so, I’ve been doing lots of video work. And while my system can handle all that—it can’t keep going forever. My current box is four years old, which is about the lifespan for a desktop system that’s used for daily work. About six months ago, my weekly system health scans started showing sector failures, and I knew it was time to start shopping and figuring, to see if I could afford to not just replace, but upgrade. I mean, what’s the point of getting a new computer if it’s not bigger, stronger, or faster than the previous one?

Anyway, within 24 hours of zero balance, I charged a new, faster system. And I’m OK with that. It’s the cost of doing business.

The new box arrived yesterday, and as soon as I finish writing this post, and sending out an email newsletter, and run one last full backup to my portable external drive of all the files I want to transfer from the old system to the new, I’ll make the swap. This used to be a horrific experience, where I had to switch back and forth between machines to get it all right. After doing it so many times, I have it down to a system: lists of software I have to install, and things I have to set up.

Meanwhile, life off the computer is all about setting up appointments and knocking them down. I received my nice, shiny insurance card in the mail on Saturday, and immediately scheduled a mammogram, which happened yesterday. Results via email: negative. Another small victory. Now, I have to get my ducks in a row to go get a colonoscopy before I see my oncologist for a checkup in March, so he won’t lecture me.

On Tuesday, I go get my eyes examined, which is a big one, since last year, I missed my annual check due to the unscheduled health disaster. Somehow, I just never got to it before the end of the year. January is the month to get it done, while I have the small stash of cash to cover exams and new glasses. My everyday glasses are two years old, and my computer glasses are three years old, and I can tell they both need replacing.