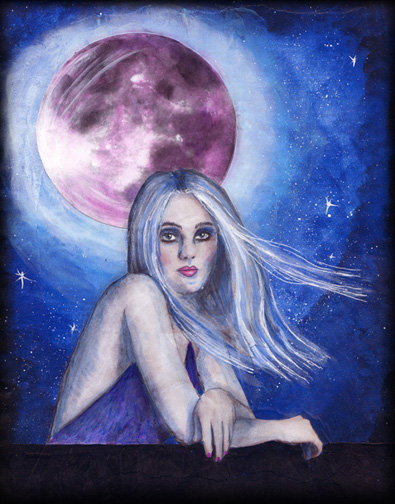 Today’s artwork might look familiar, because I’m using it for the cover of the Art Journal Madness issue of Bad Influence, and as the logo for the Kickstarter project that goes with it, and for the call for art for the issue, and…and…and. This piece is really getting a workout. I sort of created it out of frustration, because the digital piece I tried as the first cover attempt wasn’t quite it. I ended up cutting a piece of cardboard the size of the cover art I needed, and doing this piece, which isn’t exactly where I was originally headed, but also better than what I had in mind. Sometimes, happy accidents are better than that picture in your head, you know?

So, I haven’t talked too much about the whole Art Journal Madness epic here yet, because I’ve been so busy doing it elswhere. My Patreon patrons have heard a little bit, because I write more openly there than I do here.

I’ve had my eye out for a theme for the next issue of Bad Influence, the zine I’ve been doing off and on since 2004, ever since I finished the last issue. I have a running list of themes, some of which have been voted up in polls, but none of them really jumped out at me.

This year, I’ve sort of been more focused on my personal artwork, thanks to a little help from the folks on Patreon. The money they pledge each month gives me a little wiggle room in my schedule, to let me do work that isn’t for anything but growth and experimentation. A lot of that work has been in art journals. Eventually, I came around to “hey, why not do an art journaling issue?”. It seemed like a no-brainer, once I thought of it.

Most projects I put together start with notes in a spreadsheet. When a project gets its own page in a spreadsheet, I’m usually pretty serious about it, and that I’ve put enough thought and planning into it to move forward. AJM moved to its own sheet pretty quickly, with columns for the zine, Kickstarter, a journal page swap, and eventually, a year-long class. Lists of things to do turned into a calendar, because I’m most successful when there are deadlines to hit, and a plan on how to hit them.

That sort of brings us to today. Artwork is arriving in my inbox daily, and swap pages are starting to show up in my mailbox. The Kickstarter is running, and the project is 30% funded, with 15 days to go. That’s not quite as far along as it should be, and I’m starting to formulate the “what if the Kickstarter doesn’t meet its funding goal” plan, because if I don’t meet the goal, I get zero dollars. If you’d like to pitch in, here’s the video, with a link to the project in the upper left corner (click the K).