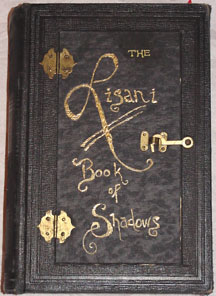 The Lisani Book of Shadows was my entry in theround robin. This book was originally a 2500 page epic on legal forms that I bought for a dollar at Half Price Books. (The guy at the counter said, “Jeez, that’s an awfully big book for a buck!”) I had it in the back of my head to do some sort of spell book with it, but it was way too heavy to use in a RR—I had to come up with a creative way to make the book lighter if it was going to work.

The cover of The Lisani Book of Shadows: I originally wanted to do some dimensional work on the cover, but realized that it probably wouldn’t travel well, and would be a big pain for the other artists when they tried to work inside the book. I decided to do the dimensional cover work inside the book. First, I cut a door in the cover, and added hinges and a catch from Home Depot. Hand lettering with a gold paint marker looked sufficently rough to match the book’s slightly beat-up quality.