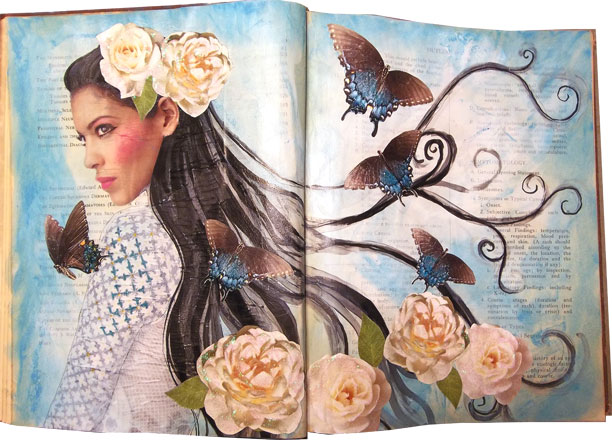 Today’s artwork is a set of altered book pages. Hey. Remember altered books? I actually had someone comment on this earlier in the week. He said it was nice to see that altered books were still a thing, because he hadn’t seen any in a long time.

Altered books are always a thing at my house.

My art mojo, which has been relatively quiet for most of this year, seems to have returned, thanks in part to the altered books group on Facebook. I’ve been motivated to make things, like this set of pages. And video the process. I’ve done it three times in the last week or so, and I feel more coming on. I threw the first couple up on Go Make Something, and then decided that I’m not really interested in putting more new content up there with stuff that’s ten years old. So, I did what any insane woman would do: I started another web site. I Alter Books is where I will put the new stuff.

So. My criteria for posting stuff on the new site will be that it does start with a book. That seems pretty simple.

I also decided, after cleaning out my altered book work here on this site, that it might be a bit of a shame to just toss six or seven years worth of photos. I have pics from over two dozen different projects, but, because they don’t really represent the kind of work I do now, I don’t really want to leave them posted here. I started rearranging the images. Rather than filing them by project, I starting filling folders by technique. All the fold-out pages I’ve done in one folder. All the niches in another. Pockets. Waterfall pages. By the time I was finished, I had a great resource for a dozen techniques that I use over and over again.

I turned that into a year-long altered book class, which you can read more about at Ten Two Studios.

I think this means that 2014 will be The Year of the Altered Book for me. It’s been a while since I’ve had one of those. I believe I will be making them everywhere…