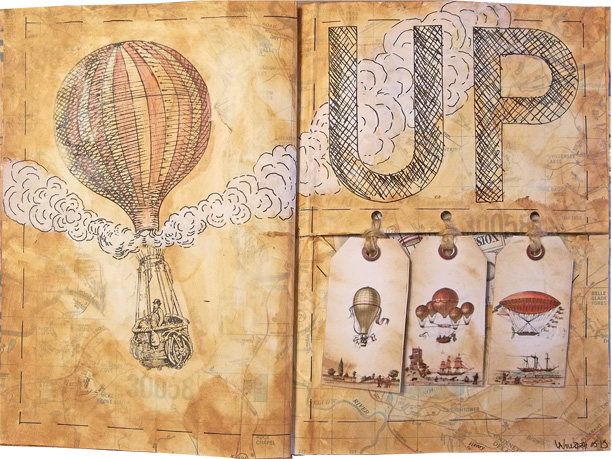 Today’s art: finished pages from Carolyn’s round robin book on transport. This was my last set of pages in the project. You can see them all posted over here.

I’m sad to see this round robin go, because I won’t have time to do any others this year. But I’m happy to see it go, because it clears the room for my next thing. After much waffling, I’ve decided it will probably, maybe, almost definitely be an art journaling issue of Bad Influence, with a Kickstarter campaign, and a bunch of artist interviews, and maybe a journal page exchange of some kind. At the end of all that, there will be a year-long art journaling class. So, the rest of my year is spoken for, as well as one week a month for all of 2016, to build all the video lessons the class will need. Boom. Huge project. It has a spreadsheet page, and everything. That’s when you know a project is serious at my house: it goes from a line item on an endless list of things I might like to do some day, to a page of its own.

Right now, I’m reading Refuse to Choose by Barbara Sher, which was recommended by one of my Patreon patrons, after I whined about feeling overwhelmed by all the ideas I have, and not being able to focus on any one thing. The book is about a personality type Sher has labeled Scanners: people who have many interests, and are unable to focus on one. I’m not entirely sure I’m a Scanner, because while some of the descriptions apply to me, all my interests tend to be in the arts. On the flip side, doing one thing for a while, getting really good at it, and then abandoning it for the next thing is pretty much a description of my whole life. So, for now, I’m following the exercises in the book.

Today’s exercise is to list all the things I’ve done or accomplished in my life so far. I decided to do that here, rather than in a journal, because I know the list is ridiculous and long before I start. I thought it would be fun to share all the weird stuff I’ve done so far:

That’s all I can think of this morning. I’m sure those of you who have followed me for a while will say, “Lisa, you forgot about X.”, and yes, I have forgotten about half the stuff I’ve done. It’s hard to make a list of things I’ve done, when I have so many lists of things I want to do.

This list could explain why I thought the funniest thing I’ve read in Refuse to Choose so far was Sher’s description of a Scanner who was wearing a button that said “I’ve Already Done That”. Because that sums up how I’ve lived my life: learn something, become proficient, then set it aside, and learn something else. It’s good when it comes to creative things, but not so good when it comes to finishing the trim work in my bedroom.