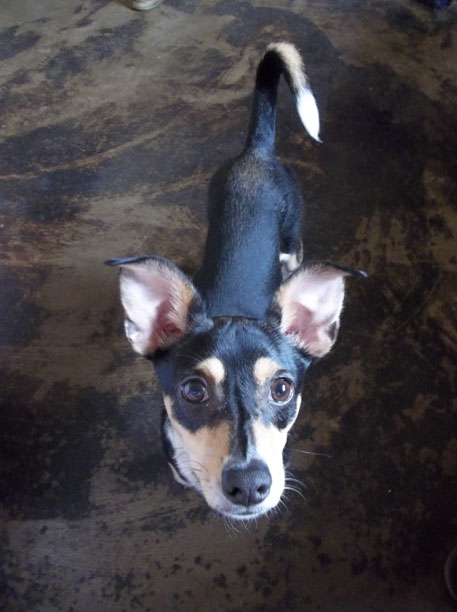 No artwork today, because I’ve only been working on things I can’t show you yet. Like stuff for the next issue of Bad Influence, which is now moving full steam ahead, thanks to a successful Kickstarter campaign. I should be able to show you those things sometime in late June.

Instead, here’s a photo of my new addition: a six month old mystery mixed puppy named Jack. He was listed as a chihuahua on the animal services sheet, but I think he’s a rat terrier, with a little bit of dachshund mixed in. He has all the personality quirks of a rattie, but a longer body and slightly shorter legs. He’s very sweet, and is a boomerang rescue dog: he was surrendered to animal services at about six or seven weeks, adopted, and then returned when the first owner discovered she was allergic.

I lasted a whole week without a dog in the house, and was miserable. I live alone, and I work at home, and without a dog, I’m the crazy lady who talks to herself all day long. Now, I’m the crazy, sleep-deprived lady with the equally crazy puppy. He’s a handful, and just what the doctor ordered. I had forgotten how much play a young dog requires. My goal every day has been to just wear him out, so he sleeps through the night. We’re also learning to sit, lie down, and wait, and to walk on a leash like a gentleman instead of a maniac. Jack is alternately very clever, and small of brain.

And now, my house is a home again.