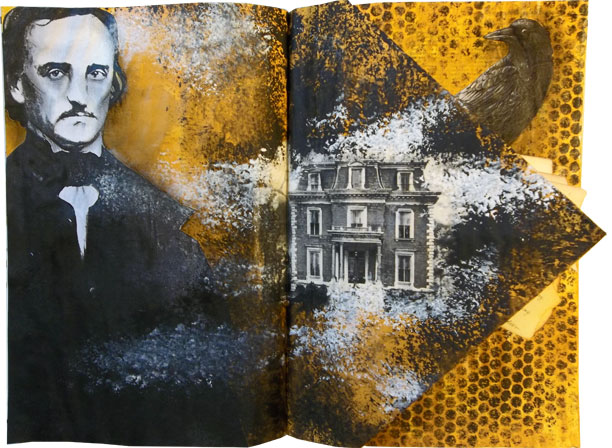 Today’s artwork is one view of a set of altered book pages, done as a sample for my A Year of Altered Books class. You can see another view of these pages, plus all the samples I’ve done for the class so far, here. They’re beginning to create quite a pile.

It’s been busy here this week. The weather is trying very hard to be less winter and more spring. I spent two hours hacking away at the front yard yesterday, trying to clear away two years worth of the untrimmed, the undivided, and the generally dead from freezing. I filled four big trash bags with dead things, and the garden still doesn’t look any better. Today, it’s supposed to get into the low 80s here, so I imagine I’ll be heading out there again. Today’s chore will involve a great deal of ugly words, because I have to trim back a bunch of roses with large, stabby thorns. I started on them yesterday, but Good Neighbor was working out in his garage with the door open, and I let an f-bomb fly after getting stabbed in the thumb through my gloves by a particularly large, pointy one, so I stopped, to try again without the audience.

On the work side, I launched a new Kickstarter campaign, for the next issue of Bad Influence. With 24 days to go, it’s 71% funded, and one of the limited rewards has sold out already. I also started posting the call for art in various groups, and via email to those artists who participated in the previous issue. With the Day of the Dead issue, it was easy for me to hunt down specific artists whose work fit the theme of the ‘zine, but this time around, I’m having trouble finding people I don’t already know, whose work might be included. Rather than drive myself crazy trying to find and invite new artists, I figured this would be a good excuse to try an open call for work. I haven’t done that for quite a while, because it invites all manner of crazy into my inbox, but the alternative this time around would be not to have anything by artists I haven’t worked with previously, which I think is kinda boring. Not that the folks I work with regularly are boring—but I don’t want Bad Influence to always be the same five artists over and over again.

Elsewhere in my work life, I’m still trying to balance this year-long class and its demands with earning a living. I’m struggling with making my monthly base amount to cover all the bills, while still having a life and growing as an artist. I’m sure I’ll figure out what I’m supposed to be doing soon, but right now, I’m sort of fumbling around, trying to find the right balance.

Mostly, I just feel like I’m juggling a lot of squirrels…