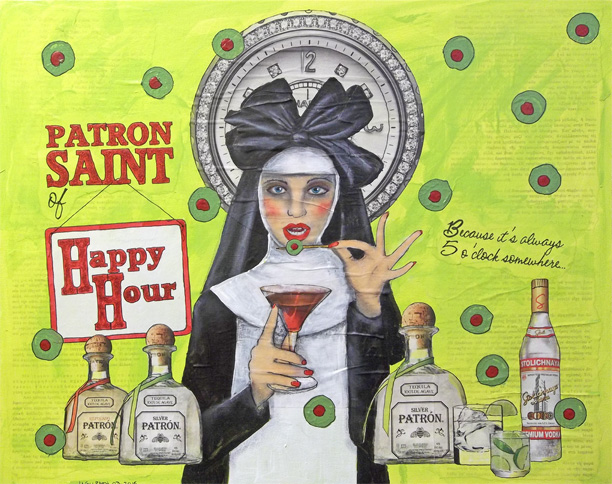 Today’s art is a new version of the Patron Saint of Happy Hour, which I did previously in an altered book. This new one is on a canvas panel, and it’s available on Saatchi Art. It also comes in three different sizes of prints, for those who are looking for something a little more economical.

I mentioned this piece in my latest email blast, and I received this response:

I think the patron saint thing is kind of offensive. Maybe you should rethink it.

This came from someone I’ve never heard from before. I have no idea who she is, or where she is, or how she found her way onto my email list. She didn’t bother to say hello, introduce herself, or say anything other than these two sentences.

So. What exactly am I supposed to do with that?

I opted to send my usual “I don’t know who you are, or where you came from, but I couldn’t care less what you think of my work.” response, because honestly, I don’t. Random strangers are certainly entitled to think whatever they like when they see my work, but emailing me negative thoughts almost always results in the single finger salute from my end.

I wonder, when I get messages like this, what people are thinking. Why would a complete stranger tell me to rethink a piece because she’s kind of offended by it? What gives someone the idea that because they don’t care for something, it should cease to exist? I mean, I don’t care for Kanye West, but you don’t see me looking for his email address, to tell him he should stop whatever stupid thing he’s doing today. (And you know he’s doing something stupid today, right?)

No. Kanye West is not my cup of tea. So I just leave him be, even when he does something I find kind of offensive. I shut up and move along, because there is an infinite array of stuff out there I do like that deserves my attention and effort, and maybe even my emails. Life does not revolve around me. Not everything in life has to meet with my approval before it’s allowed to exist.